Evidence emerging that resistance may prove futile
by Steve Cook 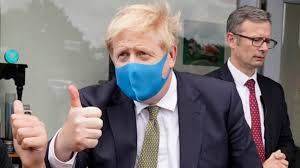 The battle with reality has long been the cause celebre of Her Majesty's Government, which has always taken the traditional British approach to evils such as common sense or the laws of economics - or indeed the needs of people and other terrorist factions - of ignoring them and hoping they will go away.
Time, however, may now be laying bare shortcomings in that war effort in so far as reality has not in fact gone away at all and may in fact have dug its heels in and refused to budge.
The incumbent Tory government under the leadership of the so-called Gang of Loons recently took the battle with reality to a new level. In a major departure from simply ignoring it, it adopted the more aggressive W.H.O. strategy, masterminded by such "Reality Warriors" as Bill Gates, of replacing reality with an alternative reality of its own invention and then trying to get millions of people to buy it.
It was hoped that making the new reality easily assimilable through a series of multi-media injections and marketing it as an antidote to rational thought might smooth the way but evidently it was not to be.
Even the deployment of a lovable mascot, Bojo The Tame Prime Minister (see pic above) trotted out to overcome the resistance of the general public to having their brains re-wired has been to no avail as millions of people have gone over to the Enemy and sided with the forces of Reason and other resistance movements.
Consistent as ever to its cause of defeating reality no matter what the cost to other people, the government took great heart from the collapse of its latest offensive and redoubled its efforts to send more resources into the jaws of defeat.
The recent offensive against Reality was, as you know, the masterstroke of launching a media-borne epidemic in which an illness very similar to the Black Death slaughtered people in their thousands and brought the nation to its knees, with hospitals overflowing with dying victims, people dropping like flies in Tesco and un-buried corpses piling up at undertakers.
The offensive started well but then quickly ran out of momentum as the forces of reality got the upper hand and millions of people noticed minor discrepancies such as the illness being more similar to flu than The Black Death, so few people getting sick that the vast majority hardly knew anybody who had, hospitals being half empty, the NHS being being wound down in order to save it and that most of the people who did die were killed by the government.
The government then tried to bolster its flagging offensive by issuing fake death statistics in which every time someone died it was blamed on the Epidemic and then having a Lockdown to reduce the escalating death statistics whilst convincing everybody that the epidemic was ruining the country.
When that too petered out and people truculently and seditously refused to be afraid, it sought other ways of convincing people there was an epidemic going on. This was sorely needed because without such reminders there was a danger nobody would notice and the whole effort to supplant reality with a media-friendly alternative would have been wasted.
At this writing, the strategy of trotting out Bojo The Tame Prime Minister to talk it up a bit and tell everybody to wear a mask is being deployed.
Masks, it should be noted are a vital weapon - some say a last resort - in the battle against reality in so far as they help maintain the conviction that there is an epidemic going on.
But despite the investment of massive resources and the mobilisation of media Fear Bombers and the deployment of secret weapons such as the Spinning Twister cunningly disguised as government briefings, many fear that resistance to reality is proving futile and that the government should skip the whole thing and do something useful instead, such as investigating the safety of vaccines or even not lying - although many in government believe the latter is impossible whilst the former might upset Bill Gates.