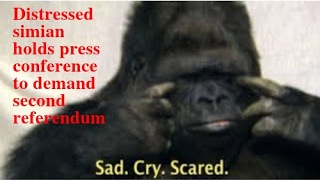 In the wake of startling successes in teaching apes sign language, researchers at The University of Neasden have made another breakthrough.

They have extended the vocabulary of basic signs of Dennis the Gorilla to 347. Dennis has proven able to communicate and assimilate increasingly complex concepts and they have finally managed to get him to understand how Brexit has stolen his future.

At a recent press conference, in which he demanded a second referendum, a distressed and gloomy Dennis told reporters that what Brexiters have failed to appreciate is . . . (continued on page 1132) 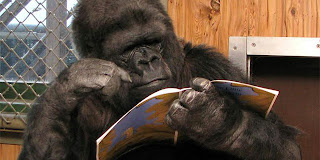 Dennis later announced that he plans to strand as an Independent pro-EU candidate in the forthcoming general election (slogan: "European Union - nothing could possibly go wrong"). |