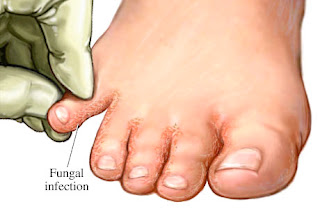 The deadly athletes foot pandemic (which starts with “pan” instead of “epi” and is thus much more scary) that has cut a swathe of carnage throughout the civilised world (Iceland) and America may already have claimed a billion lives and looks set to claim a bazillion more according to recent discoveries by scientists.


Officials representing Big Pharma and other charities have ordered the government to take urgent action as the epidemic shows no sign of abating. It may in fact present a bigger threat to LAKI (Life As We Know It) than any of the previous epidemics that infected tens of people the world over, such as Bird Flu, Swine Flu, Ocelot Boils, Horse Hair and Blancmange Fever and brought common sense to a complete standstill.

A scientific team working for the pharmaceutical giant BCI (Benevolent Chemicals Inc) made the shock discovery whilst researching into how to find a use for vaccines that might otherwise be wasted and threaten the pharmaceutical industry with the nightmare scenario of having cooked up a chemical it can’t make money out of.

Hitherto, athletes foot had never been considered particularly deadly except in rare cases of people who have more than two feet but it is now known that it is caused by a variety of fungi all belonging to a sinister group called dermatophytes.

Dermatophytes are now believed to be the most evil fungi in the universe. They may have killed more than a billion people since history began. Officially dubbed a Huge Scary Threat by the government pursuant to instructions from a number of charitable bodies such as RIGHT (the Rothschilds Institute for Global Hysteria and Terror)and HOAXY (Help an Aged Oligarch eXterminate You), dermatophytes fungi were found in the feet of one in three of the cadavers examined by researchers at a New York mortuary. As nearly three million people die in the US every year this proves that athletes foot is now linked to almost a million deaths a year in the US alone.

It explains too why athletes foot escaped attention for so long because, whilst COD (Cause Of Death) of one in three people appeared to be a variety of things such as pneumonia, leprosy, heart attacks, getting shot and so on, it is now known that such things were merely complications brought on by the dermatophytes infection.

It is believed that once dermatophytes takes up residence in the human foot, it disables the immune system even more than vaccines do, thus rendering the human body defenceless in the face of attacks by hostile organisms such as the Ebola virus, tuberculosis, hamburgers, Monsanto and other killers.

The statistical evidence, in so far as dermatophytes was also found on the corpses of one in three people who died from falling out of windows, getting shot, working with glyphosate or being vaccinated, also proves that the infection makes people accident prone.

Further horrific revelations also show that athletes foot, found to be thriving in the toes of many suicides, politicians and other deranged people, causes mental illness. Dr Wantme Hedexamind of the Brain-U-Like Institute, having studied the scientific findings for more than three minutes, announced jubilantly that preparations are being made to institutionalise up to a million athlete’s foot victims as they “present a clear and present threat” not only to themselves but to to normal people (psychiatrists, arms dealers and corporate oligarchs) everywhere.

National security agencies, alerted to the threat, are now exploring the links between athlete’s foot and terrorism. It is known for instance that before he was killed and dumped in the sea to save the public the cost of an embarrassing trial, the renowned terrorist leader and Homeland terror asset, Osama Bin Liner, complained of itchy feet.

It is believed that immigrants are bringing athletes foot into the country and that the epidemic may be the result of a plot by Muslims (who are already known to be to blame for everything, such as the National Debt, government corruption, corporate lawlessness, banking, unemployment, autism, Ritalin, media disinformation, the Irish potato famine etc., and not Vladimir Putin as previously believed) to smuggle a biological warfare agent into the country hidden in their sandals.

But just when it seemed that we were all doomed, Benevolent Chemicals Inc, have come to the rescue in the form of a new vaccine, Necroxia, which by an amazing coincidence had been sitting in their fridge for three years as no-one had found a market for it but which just so happens is really, really good for athlete’s foot.

Detractors and Athletes Foot Conspiracy theorists point out that Necroxia contains aluminium, mercury, ocelot spit, antifreeze, ground Lego bricks and bat faeces and has been linked to autism and the risk of dying but proponents point out that the risks are outweighed by the benefits: a child injected with Nexicron in its first year of life probably has a much reduced chance of dying from athletes foot or its many complications.

During Nexicron trials, of the children under five who inexplicably died or became inexplicably ill or autistic, only one in six were found to have athlete’s foot.

Nexicron vaccination of children is expected to become mandatory in California and other states favourable to population culling later this year.