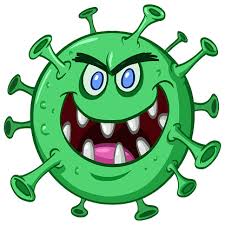 by Steve Cook Typo City 18/9/20
The world was rendered comatose by shock earlier today when the fear pandemic took another terrifying turn and headed (in the words of one Prime Minister shortly before his detention under the Mental Health Act) "right up shit creek and onto Armaggeddon Plaza"
The horrifying news was delivered by the-newly dubbed "Reichschancellor for Public Hygiene"  Matt Bangkok during this morning's televised Orders of the Day briefing to the nation.
It was deemed a timely intervention because it came at at the very point where the CONVID19 Pandemic was waning and dangerously failing to kill anybody, despite government help,  due to a loss of public confidence in the virus' ability to inflict  mayhem.
Mr Bangkok told a nation run dangerously low on stocks of things to be terrified about that secret scientists working secretly at secret locations for secret reasons have discovered that the CONVID19 virus has a hitherto undiscovered method of transmission.
Discovery of the hitherto unknown way the virus spreads has prompted mathematician Neil Fergettuson to work more of his legendary mathematical equations, which whilst being too brainy for anyone to understand, are known to be accurate to within a narrow yet acceptable margin of plus or minus forty thousand percent.
His sums have enabled him to predict without fear of contradiction that, "hopefully, a  hundred million people in the UK alone could die by Tuesday lunch time unless the government throws common sense to the winds and takes immediate steps to introduce a dictatorship."
Fergettuson is widely held to be a genius like Stephen Hawking because no-one can understand what he is talking about. The new emergency measures, code named "Operation Straw Clutch" will also include steps to : The method of transmission has been identified as human flatulence. Research has clearly shown that the virus is carried on the aromatic gases contained in the average fart. This places very short people at extra risk and they are strongly advised to self isolate immediately in a pub, shopping centre, cinema or some other place far from people.
The government has therefore decided, based on three minutes of painstakingly scientific press releases to: The new measures are expected to be a shot in the arm (or arse) for British Industry after it was completely shut down apart from a factory in Shropshire making masks.The monthly GDP is expected to soar to well over £347 thanks to a boom in APE production.
The nation was claimed, by the Prime Muppet, to be rejoicing at the news, although it is believed the PM may have been misheard through his face mask and had actually said "the nation is revolting". The setting light to a COVID Marshal by an angry mob of no more than 6 rioters in Leamington Spa yesterday suggests the latter is more likely.

Further rioting was reported across the country although government restrictions on public gatherings and news that the virus picks on protesters for no apparent reason have drastically changed the style of rioting as this clip of a COVID riot on Manchester shows.

Finally, here are some cool, tasteful designs for the new masks that will help the wearer not look like a complete twat.