Accolade richly deserved after brilliantly bringing Britain to her knees 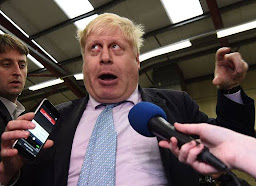 The award is given to the person who inspires the most satirical articles over a period of one year from September to September and is the industry's way of thanking those who makes the over-stressed satirist's job that little bit easier by:

In third place was Professor Kneel Ferguson, famed for his unforgettable performances in "The Charlatan" and "The DaVinci Covid".

In second place was Matt Bangcock ("I, Zombie", "The Invention of Lying", "The Sting").

NEWSFLASH! British PM Rushed to Hospital! The nation mourns as medics report, "nothing to worry about".

The aforementioned masterful performances include:

The Foreign Minister. Johnson plays a British foreign Secretary who does his best to annoy Vladimir Putin in an effort to win the heart of a globalist Cabal. His efforts to woo the Cabal pay off and they help him become a Prime Minister despite his being a bit dim, whereupon he does right by his benefactors by bringing Britannia to her knees. She was already on one knee but Johnson shows his brilliance by bringing  her to both as well as the Promised Land of Rack and Ruin).

Honey I Shrunk The Country. Johnson plays a down-at-heel politician with a terrible haircut who falls under the spell of a mad scientist (Gill Bates) whose magic formula (COVID9) is able to miniaturise large and unwieldy countries until they fit comfortably in the pocket of Nathan Rothschild. Using the formula, which he mistakes for a potion that will make him closely resemble Churchill, Johnson accidentally shrinks Britain to half its former size overnight and this makes him closely resemble a complete git.

Muppets: a gang of demented muppets take over Britain in a coup and use their new-found power to annoy everybody (especially the French).