Tests show miracle vax 100% safe for those who don't take it. 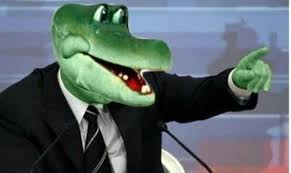 The UK Health Secretary, Matt Crocodile, today declared that the pharmaceutical company Pfizer is "just like Jesus".
Speaking to a hushed and largely servile House of Commons (pictured above), he broke down and openly wept tears of joy at  how Pfizer's scientists, after minutes of extensive research in which every stone was left unturned in the search for a magic potion that would solve all the government's problems, had achieved,

"a genuine miracle on a par with turning the Dead Sea into a basket of loaves and fishes like what it says in the Bible".

The suddenly deeply spiritual Crocodile said through his tears that this is probably the greatest turning point in history on a par with the Second Coming of the Messiah - or even better -  that will "undoubtedly prove the salvation of what is left of the human race".
He went on to detail how enlightened beings with huge brains, suffused with a love of humanity had laboured through the night (last Tuesday) to produce a magic elixir conjured . . .  um, miraculously,  from dead fecal matter and antifreeze that will: Crocodile explained how the aforementioned night-long research and the exploration of thousand of press releases have established beyond reasonable thought that the new vax is completely harmless apart from its side effects and proven not to kill any known Coronavirus.
And he added:

"And just to sweep any doubters under the carpet , this has nothing  to do with any so-called plans to cull the population and you can trust me on that."

When challenged later over the issue of the vaccine not being as safe as he says it is by the small margin of a bazillion miles, he was able to expertly lay such conspiracy theories to rest in a statement backed by science that said,

"To thoroughly lay to rest people who have used evidence and other tricks to make allegations that the vaccine is probably lethal, we can tell the British people emphatically and scientifically that, oh no it probably isn't, and trust that will be an end to the matter."

On the safety issue, Mr Crocodile was later forced by scientists, sensible people and other conspiracy theorists  to slightly amend his claim that,

"The vax is proven completely safe with no dangers or downsides whatsoever."

"On the  matter of ensuring your complete safety, it is probably better not to take it, especially if you are ill or likely to become ill at some time in the future."

Reports are now coming in that the Pfizer laboratories deep under the Mountains of Avarice are to become a place of pilgrimage on a par with Lourdes (except with drugs).
Meanwhile, we can disclose that the Church of England has been instructed by the Higher Powers at Suppression Central to nominate the CEO of Pfizer for sainthood.
Henceforth John Pull Woolover will be known as Saint Vax of Phrmacopia.