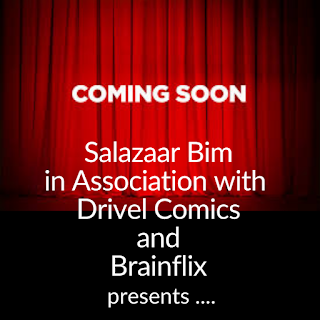 by Steve Cook
Legendary Bulgarian film maker Salazaar Bim (The DaVinci Covid, The Mediatrix, The Man Who Lost His Sandwich) has just completed production of his latest blockbuster, a film loosely based on the Drivel Comics “masked villain/superhero” theme.
Drivel (recently taken over by  Johnson and Hancock’s Lie Factory Productions, motto: “why bother when you can fib?”) plan to release the move next month under an exclusive deal with Brainflix, the straight-to-your-brain subliminal implant app that allows you to bypass consciousness and watch movies in your sleep.
The film’s hero, played by Rick Moranis, is just a normal average citizen who even seems fairly intelligent much of the time but he becomes genetically altered after being bitten by a media-borne virus. Thereafter, when frightened by a sudden government briefing, he is dramatically transformed into the superhero, The Masked Sheep.
The Masked Sheep fights a lone but terrifying crusade against common sense and other enemies of humanitarian charities such  Help an Aged Oligarch. He is aided by various powers including the power to believe everything Matt Hancock says no matter how daft, the power to sacrifice all of his human rights without blinking, the power to watch a briefing by the PM without punching the TV and the power to function without the need of an IQ.
His most powerful . . . er, power, however, is his power to cause villains to lose the will to resist just by being in his vicinity, although unfortunately he has the same effect on everybody else as well.
The Masked Sheep has a sidekick in his ongoing war on Reality. Known as Mop Head, this is a character who after a cloning accident becomes a normal run-of-the-mill muppet posing as a Prime Minister by day, then transforms into an even bigger muppet upon contact with Bill and Melinda Gates, any behavioural psychologist or similar poisonous biochemical agent
.
The Masked Sheep, thanks to the miraculous yet pointless technology of Brainflix, will be visiting you in your sleep from this coming Easter.
So try to stay awake if you can.