Finger of blame points at the "Pandemic of Peace" 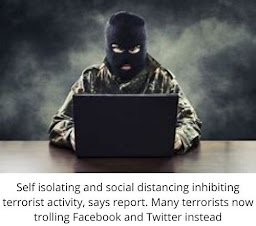 Researchers believe they may have found the answer to why there has been a significant drop in the number of terrorist incidents advertised in the media.

"We think that the reason may be two-fold,"

"and according to our ten minutes of exhaustive research, both spring from the influence of COVID19."

The first, he explained, is due to the fact that with the virus on the loose, most terrorists are self-isolating, whilst social distancing rules have severely inhibited indoctrination procedures at terrorist training camps such the popular one in Melton Mowbray and the Taliban Theme Park near Leamington Spa.
Secondly, the drop in terrorist activity and the switch of media interest to more efficient methods of bringing dismay to large numbers of Brits, such as the government's handling of the NHS during the pandemic, has left many would-be terrorists with the feeling they can, "no longer be arsed" as one popular homicidal maniac explained on Piers Morgan's new breakfast show, "Boiled Egg and Soldiers".
It is true, too, that the government has been able to scare a lot more of its citizens with a simple virus than it ever could with terror incidents that were far more expensive and time-consuming to organise.
It is hoped that touting the virus as a solution to terrorism may help bolster its popularity, which is waning fast. A reappraisal of the virus has already produced headlines such as those in this morning's Times (COVID  Pandemic of Peace) and The Sun (Cor, Wot a Virus!).
A similar decline in environmental concerns may also trace back to the virus and scientists are  investigating the possibility that its RNA strands (see Scientists Discover that Nobody Knows what RNA Means!) may be having a warming (or cooling) effect on the climate which isn't changing as much as it was a few months ago.
On the other hand, the Ministry of Hysteria, working closely with the security services' Weaponised Fibbing Division, maintains that so far as climate change is concerned little has, er . . . changed and that the blame can be laid on Russian hackers who have maliciously seeded the internet with optimism.
The hackers are, for instance, believed to be behind yesterday's alarming tweet by the Minister of Health, Ron Poorlie:

The Ministry later issued a retraction blaming Vladimir Putin who is believed, based on evidence not yet in, to have done the hacking personally such is the extent of his determination to destroy Western Civilisation as we know it.
The Minister himself later tweeted a clarification that clearly demonstrates the government's resolve to "follow the science":

"Secret science clearly shows cheering up even a bit is impossible."